Some time ago I acquired a Raspberry Pi. These little computers are awesome, it is amazing that a full blown computer can be had in a tiny little package for so little money. The possibilities for tinkering geeks and for education are endless. Of course, the first thing I wanted to do was to get Firefox running on the thing. I also wanted to be able to build Firefox for it so that I can hack on the graphics support for it. And understand the process so that when an army of volunteers show up wanting to hack on Firefox for Raspberry Pi (which I hope they do), I'll be able to help. (For a variety of pretty sad reasons, we can't support accelerated graphics in a supported configuration on the Raspberry Pi. That would be massive boost to performance. I'm sure there are a lot of other, interesting things we could do too. Most of them are gated on hardware acceleration though.)

Anyway, the Raspberry Pi is way too underpowered to actually compile Firefox on. So that means cross compiling Firefox for the Raspberry Pi (ARM6,Raspbian) on my PC (X64,Ubuntu). And then I spent three months (seriously) in an entire world of pain. I am really not a Linux whiz, and I've never cross-compiled anything before, and I am not that familiar with Firefox's build system, so there was a lot to learn and a lot painful ways to screw up. Not least of which was that I ended up upgrading Ubuntu in the middle of this, and after that I could no longer debootstrap wheezy. So, if you are running Ubuntu 12.04, DO NOT upgrade to 12.10!

Oleg Romashin (romaxa) has excellent instructions here for doing this. A lot of my pain came from not following these to the letter. He also helped me out so many times on this journey that it was embarrassing, so big thanks to romaxa! Any credit for getting this working at all goes to him, I just blundered through it and hope I can help others by sharing my experience. 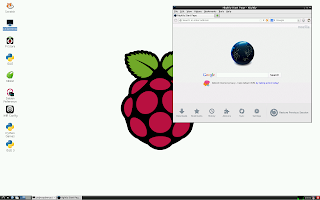 If you know all about this stuff, please skip this section. I had to look up most of these terms, so hopefully it will be helpful to some.

Cross-compile - to build a piece of software on one platform which will run on another platform. The target system is the one we will run the software on; the host system is the one we will build the software on.
chroot - chroot changes the root of the file system to a new directory for all programs executed inside the chroot ('inside' means run using the chroot program, not inside in terms of the directory structure). This allows the files and programs in the chroot to see a different set of files/programs/settings from the rest of the system. From inside the chroot, programs cannot see outside to the rest of the real file system.
toolchain - a bunch of tools and libraries used to compile a program. Compiling a program for a different target will require a different toolchain.
Crosstool-ng - a toolchain builder. You enter the configuration settings and crosstool-ng gives you a complete toolchain which you can then use to compile your software.
Scratchbox2 - a tool for making cross compiling easier. Scratchbox2 provides a virtual environment so configure and the like think they are in the target environment when they are executing on the host.
Raspbian - a version of the Debian Linux distro tailored for the Raspberry Pi.
Wheezy - a version of Debian/Raspbian. For some reason Linux distros use weird names instead of (or as well as) version numbers. I'm not sure why anyone would choose 'wheezy' it does not exactly have connotations of speed and reliability. But I guess this is what you get when engineers choose names instead of marketing people.
debootstrap - tool for installing Debian into an existing OS/file system.
Linaro - an organisation which produces open source software for ARM systems. In the context of cross-compiling for ARM, Linaro usually refers to the Linaro compiler, a version of GCC specifically targeting ARM.

When you come to running menu config (ct-ng menuconfig), you should add support for C++ and use the latest versions of everything.

Next, update any packages already installed with sudo chroot $CHROOTPATH apt-get update. Then install the packages from the wiki page (you can probably do without the Qt packages if you will use Gtk, like I did). I had to install additional packages. I'm not sure that all of these are essential, in fact I'm sure some aren't, but I'm not exactly sure which. In any case its only a few MB. I installed: binutils-dev, libc-dev, and the mozilla build prereqs from this wiki page, which are currently: mercurial g++ make autoconf2.13 yasm libgtk2.0-dev libglib2.0-dev libdbus-1-dev libdbus-glib-1-dev libasound2-dev libcurl4-openssl-dev libiw-dev libxt-dev mesa-common-dev. Some of them should already be installed (make, at least) and some you won't need (mercurial - because you already have the repo outside the chroot, g++ - because we have a compiler installed by crosstool-ng, probably others).

You will need a custom mozconfig file. There is one on the wiki page, I used a different one, which you can find here. My mozconfig will give you a version of Firefox which is closer to the versions we distribute for Linux, but not as performant as the version using the mozconfig from the wiki.

Then build Firefox with sb2 MOZCONFIG=$PATH_TO_MOZCONFIG make -f client.mk and make a tarball of the distributable using sb2 MOZCONFIG=$PATH_TO_MOZCONFIG make package. You can then post it over to your Raspberry Pi using scp, a usb stick, or whatever. Extract using tar -xjf $FILENAME which will create a firefox directory. Run using ./firefox in that directory. Then luxuriate in your Firefox on Raspberry Pi experience! (Warning - it will be pretty slow.) 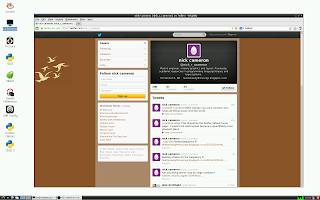 At the end of all this, you'll get a version of Firefox which is as close as possible to that on other platforms. But unfortunately it does not support hardware acceleration. Alternatively, you can use the mozconfig on the wiki page which will give you a version of Firefox which uses Qt rather GTK and EGL rather than GLX. That is not a supported configuration, but will give you hardware acceleration, which in turn allows for using OMTC and tiling, which might be enabled (I haven't tested, it looks like it might need a bit of fiddling with settings and possibly environment variables, but it might work out of the box).
Posted by Nick Cameron. at 10:25 pm

Email ThisBlogThis!Share to TwitterShare to FacebookShare to Pinterest
Labels: Mozilla

do the same variety of reasons mean that Firefox OS will never be hardware accelerated on the raspberry pi?

Props to you. The idea of doing this kind of thing as a fun side-project makes me want to smash my face in with a shovel :)

Awesome work! I'm working on a Moz-related RPi project too. Hope I can post about it soon.

Anonymous - no not at all. With Qt, you can already use HWA with RaspPi. We are keen to get Linux/EGL support going, which will lead to HWA on RaspPi with GTK. Probably won't come super-soon though.

njn, Jim Chen - well romaxa did all the hard work, I just blundered through it with my lack of relevant experience. Thanks though!

Hey, My friend! Help! I just want to watch NetFlix on Firefox Quantum Raspberry Pi. I have several issues with DRM and Widevine topic on Firefox ESR.